Originally published at: As Pipe’s founding team departs, tensions rise over allegations – We Never See Nothing

On November 22, alternative financing startup Pipe announced that its three co-founders were stepping down from their executive roles and that a search for a new, “veteran” CEO had commenced.

In an exclusive interview, co-founder and former co-CEO Harry Hurst told TechCrunch that the trio were “0-1 builders, not at-scale operators.” He said the company’s revenue was growing year-over-year and that the company had five years of runway.

Finding the right successor could take a while, however. For starters, Pipe — which has raised more than $300 million from investors since it was founded in 2019 — has just one outside board member in Peter Ackerson, a general partner at Fin Capital who himself became a VC just three years ago. Hurst and fellow founders Josh Mangel and Zain Allarakhia are the only other directors on the board.

More, detractors seem bent on raising questions about the way the business has been run. Since that article was published, several sources who wished to remain anonymous — including one investor who says he passed on investing in the startup in its early days — have said that they have “heard” that Pipe made roughly $80 million in loans to one or several crypto mining companies. The outfit or outfits have since gone out of business and the $80 million is believed to have been completely written off, said these individuals.

The startup declined to name its crypto mining-related customers, but notably, Pipe had a public partnership with Compass Mining, a now beleaguered crypto mining company that is reportedly facing its own fair share of struggles.

There are other grumblings. One source alleged that Hurst and the other two founders sold millions of dollars’ worth of their own shares in a secondary sale, a practice that became fairly common during the pandemic across numerous young companies. (The founder of Hopin, also founded in 2019, has reportedly cashed out shares worth at least $195 million.) When we asked Hurst last week just how much investors had let the co-founders take off the table already, he declined to answer.

One fintech investor also raised questions about the sophistication of Pipe’s technology. Asked whether there was any related issue with Pipe’s underlying loans, the company’s spokesperson said, “While we’ve seen some delinquencies on the platform like many fintechs in this current macro environment, we do not expect buy-side investors to experience losses that haven’t already been communicated to them or a part of the larger risk profile communicated by the company.”

Hurst has apparently been hearing about the conjecture around his company. In a Twitter thread last night, he ranted against “VCs and others hating on our company based on rumors. Pretty obvious there are bad actors with their own agendas spreading BS with no regard for the people it damages.” He also wrote: “As a leader, I won’t let this noise distract us or undermine the incredible hard work our team puts into achieving our mission to empower companies everywhere to grow on their terms.”

Meanwhile, the CEO search continues. Indeed, Pipe’s spokesperson reiterated today what the company said publicly last week, that “Josh [Mangel] is now interim CEO and Harry is still at the company in his new capacity as Vice Chairman. They both want to see Pipe reach its ultimate potential and are committed to finding a new CEO as reported and announced…”

Once Pipe’s new CEO is named, she added, that individual will assume Hurst’s seat on the board.

As for who is helping with the search, she said the answer is that “many of Pipe’s stakeholders are part of the CEO search process, including senior management and investors.” 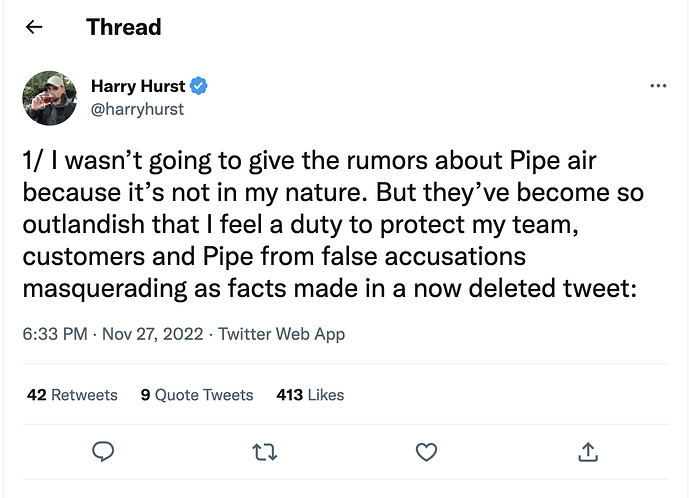 Besides Fin Capital, other VCs to lead investments in Pipe on the part of their investment firms include Marlon Nichols, a managing director at MaC Venture Capital, and Ashton Newhall, a longtime investor with Greenspring Associates and now a partner with StepStone Group, which acquired Greenspring in September of last year.

Another investor in Pipe, Matthew Cowan of Next47 Capital, told TechCrunch that he was “not allowed to comment.”

Meanwhile, a Form-D signed by Pipe Senior Counsel Peter Chiaro with the U.S. Securities and Exchange Commission in late September reveals that the company recently secured $7.12 million in debt financing, which could be construed as a positive alternative to the kind of highly structured inside round that many startups are closing currently.

Pipe co-founder and chief business officer Michal Cieplinski, whose name was absent from the company’s announcement last week, was listed as Pipe’s “executive officer” in the filing, which declined to disclose its revenue range.

TechCrunch’s weekly fintech newsletter, The Interchange, launched on May 1! Sign up here to get it in your inbox.

Got a news tip or inside information about a topic we’ve covered? We’d love to hear from you. You can reach me at maryann@techcrunch.com. Or you can drop us a note at tips@techcrunch.com. If you prefer to remain anonymous, click here to contact us, which includes SecureDrop (instructions here) and various encrypted messaging apps.